I took Mia's picture at a family party recently. She was looking through the pictures with me. When she saw this picture, she said, "Was that really on my head?" 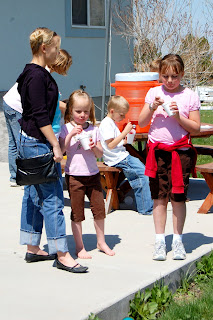 We were watching Harry Potter with the kids. At one point Harry receives an invisibility cloak from an anonymous donor with a note stating that it was once his father's and to "wear it well." Harry put it on and we could only see his head, then later only a hand and a lantern. I said, "Harry is just a head. Now he is a hand." Jared started to giggle and said, "He is wearing it well!"
Posted by Linda at 6:19 PM No comments:

After watching "the Incredibles" Mia decided that capes were no good. Gordon was playing super heroes with Mia and he wanted to wear a cape. Mia said, "Super Mia doesn't wear a cape because they might sucked up and kill you. Capes are really dangerous."

I think the way we play super heroes has changed forever.
Posted by Linda at 4:02 PM No comments: