I am taking the boys to the zoo today for Free Zoo Day.

I just heard Gordon say to Ellis, "Let's not get too close to the lions, OK Ellis?"

Ellis said, "Yeah. If we get too close to the Lions they will eat us. Right Gordon?"
Posted by Linda at 9:21 AM No comments:

I was starting a new book to read to Mia. She looked at it for a minute and then asked, "Where is the Table of Continents?"
Posted by Linda at 6:44 PM No comments:

Gordon came running in after playing outside, with the joy on his face that only a child can have, and said, "Mom. It is raining snow. Did you know that? It is!"

If possible, his face was more elated and he said, "yeah!" and ran back out to play.
Posted by Linda at 6:42 PM No comments:

Jared and Mia were talking about Poptropica and Jared suggested a plot to the story to Mia then he said, "Would you like that, Mia? Wouldn't that be cool?"

Mia said, "That is easy to do. All we have to do is ask Uncle Jordan and he will make it for us."
Posted by Linda at 6:40 PM No comments:

A couple nights ago Ellis got up to go to the bathroom in the middle of the night. We were both pretty sleepy. I helped him pull up his pants and underwear and told him to wash his hands.

Ellis started crying and said, "I don't like being in jail."

It turns out that when I pulled up his pants, I didn't pull them up far enough and his "little boy part" was under the elastic - in jail.
Posted by Linda at 8:22 AM 1 comment: 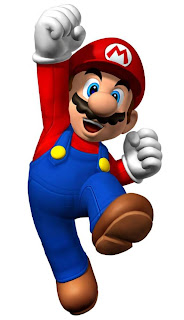 Jared is fully immersed in anything Mario Bros. Today on the way home from school Jared had this to say, "Too bad the world isn't like the Mario world. There would be a lot more villains but we could have super stars that would make us invincible if anyone tried to get us."
Posted by Linda at 9:53 PM 1 comment:

The other day Seth was driving us someplace and I thought his technique was questionable so I made a comment. I short while later Gordon said, "Mom. I don't think moms know how to drive around very fast. Did you know that?"
Posted by Linda at 12:34 PM No comments:

Gordon woke me up at 3:00 this morning. I heard him whisper, "Mom. Mom." I asked him what was wrong and he said, "I just had a bad dream. Just one bad dream. I love you Mom."

I asked him if he wanted me to hug him and he said yes. Then he hugged me, said goodnight and went back to bed.
Posted by Linda at 8:15 AM No comments:

Lately when I ask the kids, "Who left toys on the floor?" I get the response that "Mr. Nobody did it." Mr. Nobody has been in BIG trouble lately.

Today in the car Gordon and Ellis were talking about Mr. Nobody. Ellis said, "Mr. Nobody doesn't play!"

I said, "What does Mr. Nobody do? Does he just write on the walls and dump the toys all over the floor and make a mess?"

Gordon said, "No. That's just what WE do!" He later recanted that statement and said it was actually Mr. Nobody that did all those naughty things.
Posted by Linda at 8:11 AM 1 comment:

Tonight at dinner Gordon told me, "Mom. Sometimes when I'm happy I get tears in my eyes. But I'm not crying."
Posted by Linda at 10:33 PM No comments:

Gordon looked out the window and saw the sun rise. He asked, "Why is the sky pink? Is the volcano going to explode?"
Posted by Linda at 8:08 AM No comments:

Ellis has been saying the same prayer every day. I tried to talk to him about saying new things in his prayer. Now when he says his prayers he says all the same things he used to but has added, "please help us have new things today."
Posted by Linda at 10:07 PM 1 comment: